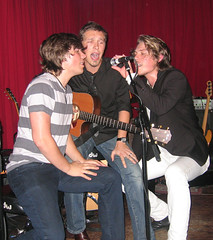 Let’s just say you were hanging out with your significant other and decided to see a favorite boy band from your youth*.  Let’s just say that since it’s a late night show, you and your guy get a good head start drinking.  So when said boy band from your youth* basically starts rocking the joint doing cover songs from many, many years** before said youth, do you start dancing along?  Dancing along to the Doobie Brothers?  The Doobie Brothers as sung by Hanson?!?!

Wow, what a night.  Those fans were crazy.  There was enough screaming and flash going of that you’d think the paps were there. I’m sure they’ll be plenty of pictures on Flickr once folks sober up enough to post them(found one).

And um…they lied to me!  There wasn’t any Rob Thomas to be seen or heard!  I was gyped!

I was gyped and forced to stand in a hot, sweaty room full of 21ers that had been drinking for hours and gay men!  Those very same drunk young ‘uns that just wouldn’t shut the hell up and made so much racket you couldn’t even really hear the music.  Let’s face it, I’m getting too old to appreciate shit like this.  Me, I want to enjoy my live music from a well-ventilated venue with comfy seats, good acoustics, a great view and wait service.

So while the young Hanson boys were rocking out those cover songs, it still was *just* three brothers from the mid-west playing 60’s & 70’s cover songs.  While I sweat admiring the loud, drunk, morons dancing like fools.***

* this is purely hypothetical…they were a hit by the time I was into adulthood folks!
** we’re talking stuff that I grew up on as a wee one with a pothead for a dad
*** remember what I said about he night starting out in Dennys?