The Depression and World War II have always held a bit of fascination with me.  I’m thinking that more than likely it’s because I spent a lot of time around my grandmother and her friends and family.  Some of my fondest memories of her were the times when she and her girlfriends and cousins would all sit around and tell stories from during the War.  Let me just say, they knew how to have fun, even while working hard in the factories.

Imagine my surprise when I saw that the Library of Congress has added some photos from the 30’s and 40’s up on Flickr!  They’re color photos no less.  It’s amazing how pure and clear those images are.  I love looking at photos of women from that era.  The circus photos are pretty cool too – then again, I read Water for Elephants not all that long ago, so this was neat in that it supplied still more photos to go along with that story.

Some of my favorites (though with 1500 or so photos, it will take me a while to get through all of them):

Backstage at the Girlie Show

Going to Town on a Sunday Afternoon 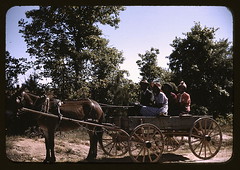 Migratory Workers Outside a “Juke Joint” 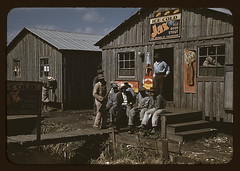 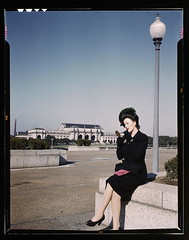 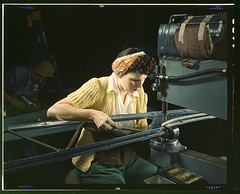 They also have a set up from News in the 1910’s, but for me, that just doesn’t peak my interest as much.