Finally! I mean it’s only taking me three days to do it. Then again, two of those days I was dealing with some seemingly major car challenges.

In a nutshell, Blogger Prom was AWESOME! The prom committee did an amazing job of planning the entire event. The food was amazing, the view from the hotel was beautiful, the drinks were potent, the music was rockin’ and everyone you met was cool as hell. What more could you ask of for a party, right?

So this is my second official blogging event (outside of a couple smaller PR events).  My first big event was BlogHer last year (which is actually  happening this weekend in Chicago).  In many ways, I think the events were quite similar.  Both were large, full on events (yes, I know BlogHer is bigger and involves training as well).  Both were events planned around socializing and networking.  Both were cool.

Blogger Prom was a much younger crowd though.  Then again, many of the bloggers at BlogHer have been blogging for years either as a “mommy blogger” (I do hate that term) or as a feminist, food or political blogger.  Most of the bloggers that I met at Blogger Prom were food bloggers.  And you could definitely tell that many of them knew each other outside of this party.

But overall, I had a great time and would quickly sign up to participate again.   If you ever get invited to meet up with a fellow blogger, even if it’s only for a cup of coffee, be sure to take them up on it.  Trust me, there’s bound to be some laughter and good times at that meeting.

The Line at the Bar 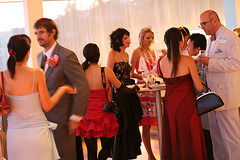 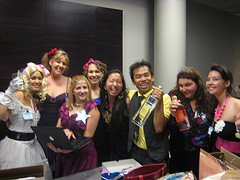 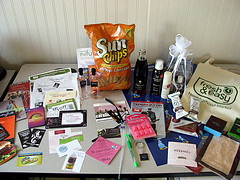 Swagalicious (though I didn't get everything shown here) 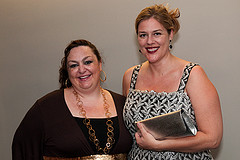 Official Prom Photo - Keep in mind, this is after a long hot night)