Was a new iPod ready, car stereo system.  Nothing extravagant.  Just something that will let me listen to something other than shitty LA radio.

Then my husband did something amazing.

He said I could go to a jeweler friend’s house and pick out something sparkly! This was awesome!  I’d been eying a WTF diamond necklace that I know had his okay to buy (even though it was totally and absolutely frivolous…but so very me).  Of course, once present with a bevy of sparkling pretties, I fell in love with a pair of earrings.  Since they were more than the necklace, I figured I’d run it by him first and get his thoughts.

So home I went.

Until I overheated.  And called AAA.  And found out that it would cost an additional $70 to tow my car home since we were out of the “7 miles free” zone.

Three hours later, we managed to get it safely to my friend’s house while we headed home to figure out what to do with it the following day…Christmas Eve.

We took about 3 hours, driving in small, three mile increments until we got within range and had it towed home.  Where it sat until we were able to tow it to the guy that worked on the radiator last time out in West LA. 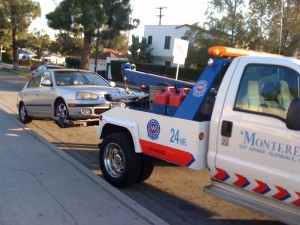 Which brings us to today and my Christmas present…no sparkly jewelry.  No new car stereo.

Nope, instead, I get a new radiator cap (seems that was the whole problem), a new timing belt, a new water pump and some new spark plugs (which he suggested I get last time he had my car).

I can’t say it’s what I’ve always wanted.  But it will be nice to know that for the most part, my  car will be set for the next five or so years.

Hope your holidays brought you something that you’ve been wanting (rather than needing).

And hey, I have one last fall semester pay check coming my way.  I just might buy myself that new car stereo after all 😉

2 thoughts on “All I Wanted for Christmas…”