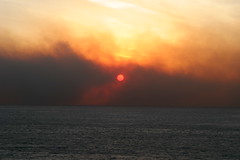 fire sunrise
Originally uploaded by hereinmalibu.
I just wrote yesterday how the Santa Ana’s have started blowing. Well, by about 4:15 or so this morning the fires started in Malibu. Now, a few hours later, buildings have caught fire and homes have been evacuated. I wonder how long this one will last. Here’s hoping no one is injured.Every year it seems to be something in Malibu, be it mudslides or fire. This year I guess it will be more of the same since after the fires, there’s usually the rains and of course, the rains bring on the mudslides. I think it takes a certain kind of person to live in part of California.Turns out we’ve got some large fires going on in Casaic and Porter Ranch as well. And due to the heavy winds, events all over the area are being canceled.  And you know you’re in LA when the LA Fire Department has a Twitter feed going on.