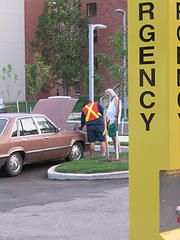 Okay, it’s now 1:30 AM Friday and I just got home from both cars officially dying and getting left behind in West LA at a shop we know nothing about. Thing is, my personal car issues seemed to begin around 2:00PM Thursday. And that migraine that started brewing around 2:00PM today, yeah, you guessed it, it’s throbbing like a beast now.

So the short version of my day…I was doing laundry and running errands when my car’s check engine light came on. It appears that the car overheated (who knows how many times in the past couple of weeks) to the point that I was out of coolant.

I was lucky enough to finish the laundry and head home. The goal was to drop my car off at our regular car guy once the hubs got home. Well, the real goal of the day was to write up a Blogger Prom recap, but that never happened.

So I finally calm down, cool off and relax. I’m waiting on the hubs to get home and we were going to head out for sushi. He calls me on his way home and as he makes the turn off Sunset onto Bev Glen, he says his car just died.

He calls AAA and they estimate that to tow the car over the hill into the Valley to our car guy in Burbank, that it will cost about $80. The guys suggests a shop on Pico that a lot of the UCLA students use. So the hubs now needs me to take my car (you know the one that overheated earlier in the day) to pick him up in West LA.

Okay, I’ll be on freeway, it’s 9:00ish, so no traffic. I won’t overheat. I make it to the Pico exit and I see the smoke coming off my engine. We figure if we take it slow and avoid the hills, that we can make it home or at least closer to home so the tow won’t cost as much to get it to Burbank.

A friend came out and agreed to follow us home to make sure we were good. Well, we only made it 6.6 miles, stopping once to water down the radiator and top off the (now, non-existent) coolant. We figured we were now 6.6 miles closer to home, so again, a less expensive tow.

Turns out we were now 7 miles FURTHER from home than we were before, so the tow would cost more.

So back, to where this all got fun…the garage where the hubby’s car is sitting and waiting. So basically, four or so hours after the hubs called me to get him…and a (pre-tip) $88 cab ride, I’m home eating cold pizza and waiting for my migraine meds to kick in.

Seriously, both cars have challenges on the same day?!?! What the hell? I mean, I’m all for “everything happens for a reason” so I’m just chomping at the bit to figure out what this “reason” must be.

The good news…it all could have been so much worse. If I had driven to Blogger Prom last night, I’d have overheated while we were stuck in traffic on Laurel. If he had made it further on Beverly Glen, he would have been on a dark, curvy road with limited cell reception.

So here’s hoping both cars don’t cost too much. And better yet, will be even better than they were before. So please, send some well wishes to our cars if you don’t mind.

It’s officially Friday, can I start drinking yet? Whew.

PS – too tired to proof-read…sorry.