Okay, we’re trying this writing thing full on.  I’m using the OmmWriter (for Mac only, I believe) so it will provide the background noise and block out all my other applications.  This way I can just write and not get pulled away by other things.  I might need to change up the background soundtrack though – not sure all these church bells are working for me.  Okay, I switched it to just birds – much better.

I’ve told the boys (the hubs and the furry ones) that “mama needs some quite for a few, so I’m shutting the door.”  And as one would expect, they don’t care.  But I shut the door none the less.  I’ve also got my cup of tea by my side.  I even dug out my super pretty mug.  I love the mug (I’ll include a photo when I repost this in the blog – see below), but since it’s more about pretty than practical, it’s not thick enough and my tea typically cools way down before I finish.  But I figured I needed to work on being present so I went for the pretty. 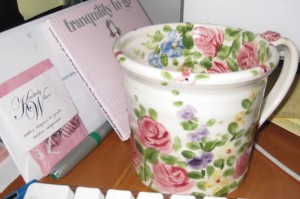 So I’m mid way through the first week of the Tranquilista e-course.  And while there’s no right and wrong here, I feel a bit like I haven’t been pulling my weight.   We’re supposed to (yes, I actually said that), first and foremost, create a morning routine.  (Funny aside here, as I was typing this, I called it a “weekly” routine, bet there’s some meaning in that little slip up).  This morning routine is to include all if not most of the following: meditation, yoga, journaling and well, something to set up the ritual.  I’m thinking it’s all about centering and focusing on the self.

Thing is, I haven’t really done anything yet.  I did write (and doodle) in my journal for a bit yesterday (and I’ll work on decorating the cover today). Oh and I’ve downloaded the Tranquility to Go exercises (yoga, I think) on my iPhone.  But that’s it. Nothing special first thing in the morning.

Then again, this has been an oddly different week for me.  The hubs was home sick all week (seems he caught what I had the previous week when he was in Austin).  So basically, I never really felt like I had any alone time.  Granted, that was all just a matter of perception.  I mean, at any given time I can/could do whatever I wanted.  I spent quite a bit of my time away from him either working, reading, running errands (many for him) or spending time with friends.  But the thought of going into another room to meditate or do some yoga while he’s around kind of weirds me out for some odd reason.

I know he doesn’t care.  Hell, I’m sure he’d support it.  Anything to make me happy or help me succeed and he’s all for it.  But I just feel like he’s right there.  So I do nothing.  Or more to the point, I do something else.  Something other than I should or could be doing.

I’ve considered sitting in the park and maybe meditating there.  But then it’s kinda the same thing…other people will be there.  They’ll know what I’m doing and think I’m weird or something.  Funny, the more I sit here and write about this, the more I’m reminded of an intuitive session I did a couple weeks ago where we realized that I often seem to let the image or thoughts of  “they” and “them” kinda rule what I do.  I guess this is all a perfect example.

Which of course, means, in my own non-yoga-y way, I am in the moment and being more aware of what’s going on around me.  Right up there with noticing more smells and scents in the air when I go outside (which is super funny to me considering I seem to still be dealing with a sinus infection, but yet I can still notice the orange blossoms – which are so amazing smelling!).  I also noticed the bread company baking their wheat bread last night.  We were all snuggled up on the couch watching a little TV and all of a sudden I got the slightest whiff of the bread.  If there wasn’t a bread making factory (think Wonderbread type of thing) a couple miles away, you’d swear it was the mind playing tricks on you.

And total aside here: I get such a kick out of being able to tell when they’re making white and wheat bread.  You can totally smell the difference.  Funnier still, you can totally tell that it’s not rustic or authentic bread baking, it obviously smells like something you’d buy in a plastic bag at the grocery store.  It doesn’t smell nearly as good as, say, real bread baking.

So let’s see…to summarize, at this mid-point of the first week, I think I’ve learned or have become aware of a couple of things:

1) I do have a bit of a morning ritual already going – get up, use the bathroom, let the dog out, feed both the cat & the dog, take my homeopathic meds (need to be water & food  free for 30 mins before and after) and then either sit down at the computer or hop back into bed with all the boys.  Granted, it’s not very ME focused, sassy or spiritual, but it is a morning routine.  To make it a bit more about me, I’ve been going above and beyond making sure I have a cup of tea each morning.

2) I have become more mindful of what’s going on around me.  I’ve noticed when I was frustrated while driving – actually said something like this to myself, “wow, look at that, I’m totally noticing that I’m frustrated here.”   I’ve noticed more scents going on around me.  I’ve also noticed that I feel a tad overwhelmed about the *need* to write daily and meditate and do all the things I’m not yet doing.  I’m telling myself that it doesn’t matter and baby steps are just fine.  But there’s a part of me that also wonders if it’s more of myself standing in my own way.

So for a mid-point here, I’m kinda impressed.  Not so bad.  Change is good, right?  Even if we’re talking itty bitty, babysteps of change.

Do you have a morning ritual routine?  If so, care to share?  And if you’re a fellow Tranquilista Lifestyler, how are things going for you as we reach this mid-point of week one?

4 thoughts on “Living the Tranquilista Lifestyle: Week One”